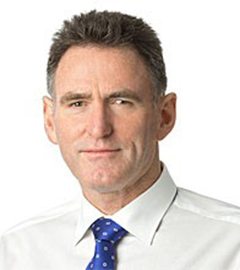 New Zealander Ross McEwan, 56, has been named the new chief executive of the Royal Bank of Scotland (RBS), “one of the highest-profile and politically charged roles in the banking world.” The Guardian’s city editor Jill Treanor profiles the new man in charge. McEwan failed an accounting module during his degree in business studies and human resources not once but twice. McEwan, appointed on 2 August to run bailed out Royal Bank of Scotland, has also admitted that he is more “comfortable with people than figures”.

But it has not stood in the way of the Bank of England clearing the appointment of McEwan as chief executive of the 81 per cent-taxpayer owned bank. McEwan was one of the youngest chief executives in New Zealand, running the local operations of the French insurance company Axa not long after he turned 40. He rose to the top after starting out in personnel-type jobs at Unilever, Dunlop and then National Mutual (which became Axa).

He has already tried to instigate change in the retail banking arm of RBS in his barely 12 months which began in the aftermath of the June 2012 IT meltdown when millions of customers of RBS, NatWest and Ulster were unable to access their accounts. About £700m has been earmarked for expenditure – and more than 1000 jobs axed – to turn RBS into what he wanted to make the best UK retail bank. In a set-piece presentation in March – delivered in fluent, straight-forward speech – he admitted being “quite surprised how bad this industry is”. Evidence, perhaps, of that preference for people over numbers – as might be the decision to waive his bonus for 2014.