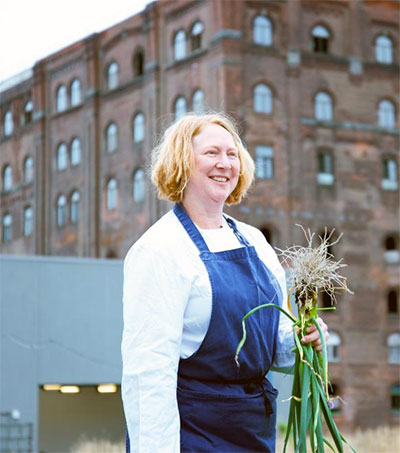 Chef Margot Henderson is invited by VICE magazine’s MUNCHIES garden series to a rooftop vegetable plot in Brooklyn, New York “to explore [an] edible playground and make whatever the hell inspires [her].”

New Zealand-born Henderson “gets her crab on in the most spectacular of ways.”

“‘So, does Rupert Murdoch pop into the garden often?’ We’ve only been in the MUNCHIES test kitchen for a few minutes when Margot Henderson sardonically asks that question about the VICE investor as she finishes tying her apron with a faint grin.

“It’s precisely this same unabashed and straightforward approach that has slowly but surely propelled Henderson to the upper echelons of England’s gastronomic scene. Henderson is widely recognised as the wife and culinary partner of Fergus – the patron saint of nose-to-tail cooking – but you’d be a damn fool to think for even a second that she isn’t a titan unto herself. Recently, she and her head chef, Anna Tobias, were in town for a dinner at The Four Horsemen and stopped by the MUNCHIES Garden to gather a few ingredients and make us one hell of a killer dish.

“Henderson began by foraging in our rooftop garden. It might have been only April in Brooklyn, but she found a bounty of chives, tarragon, and spring onion.

“When we headed back into the kitchen, Henderson explained, ‘This dish is inspired by a Sri Lankan dish. Fergus and I used to cook this together at French House.’ The duo first met acclaim after opening The French House Dining Room back in 1992.

“One type of crab is great, but three – no, make that four – is even better. Henderson added [to the pot] jumbo lump crab meat, claw crab meat, and that Florida favourite, stone crab claws. Henderson says the stone crabs, which are, of course served, in their shells, add something special to the dish: ‘It’s good to have the stone crabs in the dish to give it structure and pick at it.’

“[The dish] was spectacular – redolent of onions and herbs, but crabbier than your aunt’s pension for jumbo lump crabtinis.

“The stone crabs were most definitely worth the work: ‘This recipe is great with the stone crab because the guests get some work in as they eat the dish by cracking the shells.’”