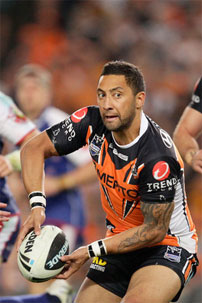 Whakatane-born league star Benji Marshall’s goal-kicking “sparked a remarkable come-from-behind win over the Warriors at fortress Leichhardt Oval” beating the Auckland team 24-22. “The experience of Marshall, 27, both with the ball in hand and his kicking game, helped turned the match. He kicked two morale-boosting sideline conversions that lifted his side and gave it the momentum and belief to keep going. ‘No one will be telling me to take the goalkicking away from him any more,’ coach Tim Sheens said. ‘He kicked great.’” In 2010, Marshall won the Golden Boot Award for the World’s best player.