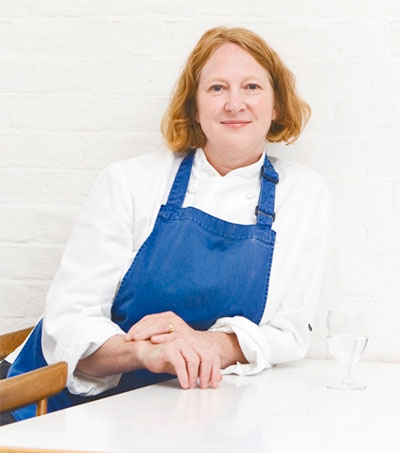 Renowned London chef, New Zealand-born Margot Henderson would take her last meal at a Pictish fort in the Inner Hebrides, “sitting on a pile of rocks overlooking the ocean, and surrounded by family, friends … and maybe a sperm whale is swimming nearby.”

For the Guardian’s weekly “Last Bites” column, Henderson and husband Fergus “would carry our food over the hills, and clamber over the rocks to the other side, where we would build a driftwood fire.”

“It would be a team effort, but I’d lead the cooking. I like having my leg up on a rock by the barbecue, watching the sea and imagining the Picts in this wild, windswept place so long ago.

“I don’t think anything tastes better than Hebridean lamb grilled on driftwood. The salty meat goes almost white when you cook it. So that’s what we’d move on to, eaten in buns with green sauce – a chopped gunge of parsley, rocket, capers, garlic and olive oil.”

In an interview with the Observer about the best things selected UK chefs ate in 2014, Henderson said her favourite dish was “succulent guinea fowl and barley,” which was served at her local London pub, the Canton Arms.

“It was well-seasoned, braised to perfection, holding its own, carving nicely, the broth not saying too much, taking on all the flavours around it, the greens textural and nutty.”

Henderson is a chef at the Rochelle Canteen, which she co-owns with Melanie Arnold; together they also run catering company, Arnold & Henderson.

Photo by The Guardian.