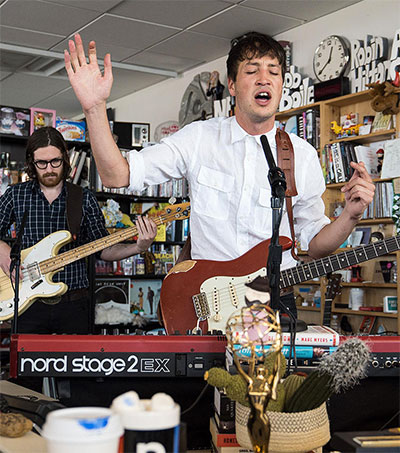 “Marlon Williams is a handsome devil with a heart-stopping voice, who writes songs about vampires and horror films. This 27-year-old, New Zealand-born, Melbourne-based singer is also a teller of tales,” tastemaster Bob Boilen writes for NPR after a “brilliant session” for the station’s famed Tiny Desk slot in Washington, DC.

“Williams is in love with a good, traditional blues or country tune and that’s just how he opens this Tiny Desk concert, with a song called ‘When I Was A Young Girl’ (also known traditionally as ‘One Morning In May’ or ‘The Bad Girl’s Lament’),” Boilen writes. “The best-known version of it was probably by Nina Simone until Feist tackled the tune. But Williams’ rendition is more stunning than any version I’ve heard and seems to conjure the spirit of Roy Orbison with its long, deep-throated incantations. The purity of Williams’ voice is rare and entrancing.

“After that first tune, performed solo with just his acoustic guitar, he strapped on his electric guitar, brought out his band, snapped his fingers to set the beat and sang about being stoned and running around Los Angeles dressed as a vampire. At the time of our taping, back in October of last year, ‘Vampire Again’ was the newest song since Williams’ 2016, self-titled release.

“After finishing that tune and losing his guitar pick, he found one left behind by Wilco and launched into a tune we’d not heard before. He calls ‘What’s Chasing You’ a song about horror films, but it sounds like a 1950s tune about unrequited love.

“The brilliant session ends as the band gathered around a single microphone for another new tune called ‘Make Way For Love.’ We now know it’s the title track to Williams’ forthcoming album and it reveals an intimacy at the heart of what makes him such a magnetic artist.”