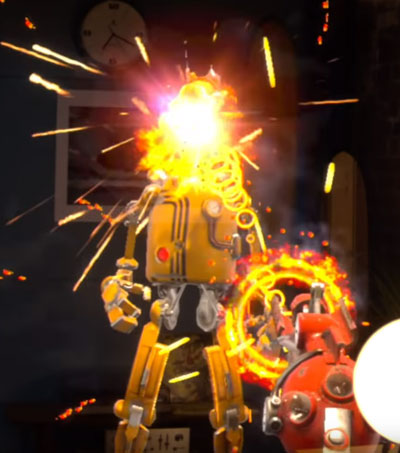 How Magic Leap Is Making the Magic

“When I met Rony Abovitz at Magic Leap’s Developer Conference (aka LEAPCon) in downtown Los Angeles yesterday, I told him it was like meeting all four Beatles at once. He’s defined for me and so many other futurists the true meaning of Augmented Reality (AR): invisible, ubiquitous, and wearable computing,” writes Charlie Fink in an article for Forbes.

“It’s nerd Woodstock here, with Doctor Grordbort’s Invaders standing in for Jimmy Hendrix and Rovio’s brilliant AR version of Angry Birds as The Who. Both free titles were released into the Magic Leap (ML) app store yesterday afternoon,” writes Fink.

“This conference is critical for Magic Leap. To be successful, the company needs a robust developer community (…). When the consumer version of the ML is available through AT&T,” “hundreds of apps will be needed to please a broad palette of consumer tastes and interests.”

“On display were dozens of props, artifacts, costumes and characters from the Dr. Grordbort’s game universe, which was created by WETA Workshop and Games Studio in New Zealand, responsible for popular special effects-laden movies like The Hobbit, The BFG, Pacific Rim, and Blade Runner,” as reported in the article.

“The collaboration with WETA began five years ago when Abovitz convinced them to make a game for his “highly irrational and wholly implausible” platform that existed only in his head.”   “This is a ‘tip of the spear’ for us,” he said. “The needs of the WETA team constantly pushed the engineering team forward.”