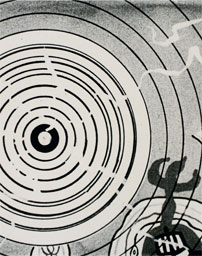 Animation film Tuslava (1929), created by Christchurch-born artist Len Lye, is part of a an exhibition entitled ‘Animism’ on from 26 April through 28 July at Berlin’s Haus der Kulturen der Welt. The exhibition examines the delineation between life and non-life on the basis of aesthetic symptoms. “This backdrop is the discourse of animism: a term defined by nineteenth century anthropologists searching for mankind’s alleged primitive, original religion, which they identified as the erroneous animation of the surrounding world,” New York-based art networking site e-flux explains. Tusalava consists of thousands of individual drawings, evinces the influence of Australian Aboriginal art and may be considered a “primitivist” work of sorts. Lye’s sculptures are found in the collections of the Whitney Museum of American Art, the Art Institute of Chicago, the Albright-Knox Art Gallery and the Berkeley Art Museum. He died in New York in 1980.