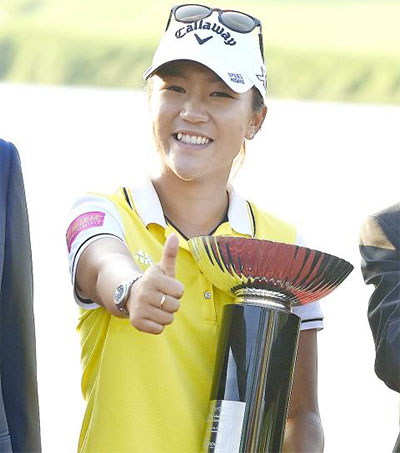 New Zealander Lydia Ko, 18, has won the Fubon LPGA Taiwan Championship and has regained the No. 1 spot in the world rankings, replacing American Nancy Lopez as the youngest player to win 10 events of the LPGA Tour.

Ko holed a 30-yard pitch for eagle on the par-five 12th and finished with a seven-under 65 in sunny, breezy conditions at the Miramar Golf Country Club in New Taipei City’s Linkou District.

Ko took the top spot in the world from South Korea’s Inbee Park with her fifth LPGA Tour victory of the season.

“I think winning and playing well at an event is the top priority, and then if you get the extra bonus with it, it’s even better … The winning part is probably the most memorable. I haven’t really thought about being world No. 1 again,” Ko said.

“I actually met her in Cleveland for an outing a couple of months ago,” Ko said about Lopez. “She’s such an amazing person and an amazing golfer. To have beaten her record, it’s an honour.”