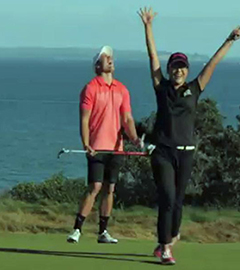 Kiwi golf prodigy Lydia Ko has finally announced she has turned professional – but to mix things up a bit she has done so through a YouTube video and Twitter.

A two-time winner on the LPGA, Ko made a YouTube video with Israel Dagg of the World Cup winning All Blacks Rugby team, who jokingly offered to caddie for Ko.

Ranked fifth in the world Ko, just 16, has already been blocked from $1.2 million in winnings because of her amateur status.

Now all that changes, with the Aucklander eligible to collect winnings and set to compete in her first tournament as a professional in November.

Ko, who had developed a taste for teasing media with comments about her amateur status at press conferences, has already become the youngest ever player to win a professional event when she claimed the New South Wales Open in 2012.

She has since won the Canadian Open twice and finished second in the Evian Masters – a Major championship.

“This is a very momentous day for Lydia and we are so thrilled that she has chosen such a unique an entertaining way to share her news with her fans today,” Murphy said.