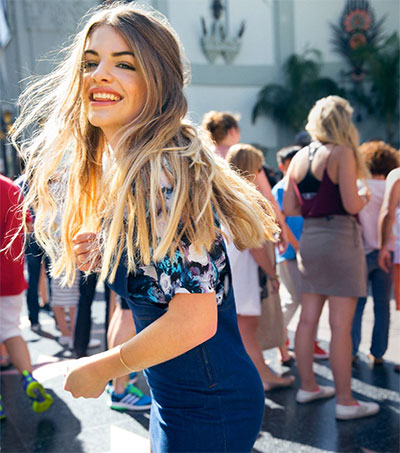 Lorde’s Little Sister India Has Dreams of Her Own

In the past couple of years, India Yelich-O’Connor went to both her high school ball in Devonport and the 2014 Grammy Awards in Los Angeles – not the average itinerary for a 16-year-old, but an especially exciting one when your sister is Ella Yelich-O’Connor, aka award-winning singer-songwriter Lorde, Molly Creedon writes for Teen Vogue.

Yelich-O’Connor loved LA and can picture herself working there in the future, perhaps in television or film (though from the 850,000-plus listens she has received on her rendition of “Say Something” on SoundCloud, perhaps singing is also in the cards).

“It reminds me of Auckland but seems more high fashion. Going to places like Rodeo Drive and Echo Park is amazing,” she says.

Tinsletown may await her in the future, but for now she’s focused on school, where she enjoys English and Greek mythology and acting and singing in school plays.

“I think one of the perks of having siblings is that everyone’s always there for one another, no matter where you are,” she says.

“And in the clothing department, you can basically take anything you want,” Yelich-O’Connor recently snuck into Lorde’s closet while her sister was away and borrowed a red floral Dolce & Gabbana skirt. “I took it to LA, brought it back, and put it in her closet without her knowing,” she says mischievously.