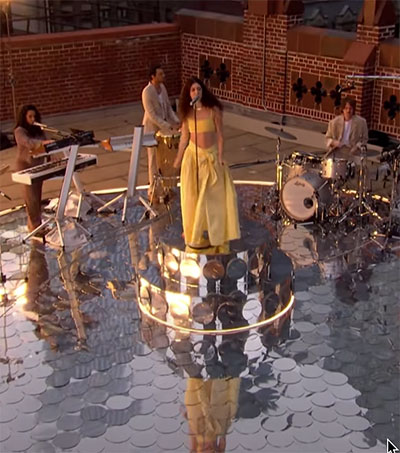 New Zealand pop singer Lorde, 24, was the musical guest on a recent episode of The Late Show with Stephen Colbert where she performed the title track from her forthcoming album Solar Power, NME’s Alex Gallagher reports.

Auckland-born Lorde and her backing band performed the track from the rooftop of the show’s long-time filming location, the Ed Sullivan Theater in New York, on a mirrored platform.

Primal Scream frontman Bobby Gillespie told NME he and the rest of the band were “flattered” after Lorde revealed the title track from Solar Power was inspired by Primal Scream’s 1990 song ‘Loaded’.

“I need to hear [the whole album],” Gillespie told NME. “I’ve heard that one track. I was watching the Italy vs Spain match and they were playing Lorde over the goals at the end. It’s incredible.”