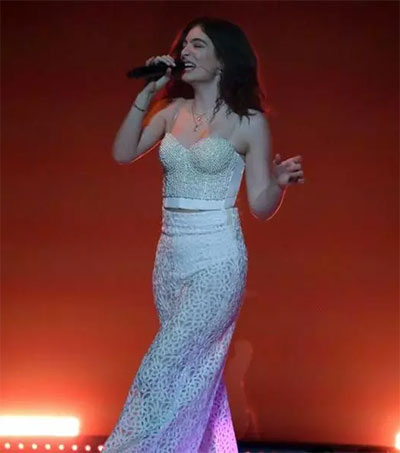 Lorde Scripts a Party and Then Brings It

Lorde’s “fast-paced, yet emotionally resonant show at TD Garden” in Boston “was a superlative showcase” for her second album Melodrama, Maura Johnston writes in a review of the recent concert for The Boston Globe.

“Lorde, her backing band, and her troupe of dancers gave its songs a workout, showing off their sometimes left-field structures and telescopic lyrics; the shared-secret verses and self-deprecating witticisms of ‘The Louvre’ opened into a starlit, anthemic chorus, while the existentially tormented ‘Perfect Places’ turned into a cathartic singalong, its unprintable refrain sounding jubilant when multiplexed,” Johnston writes.

“The stripped-down emotional heart of the show began with a monologue about her feeling like an outsider, which turned into a metaphorical group hug for all the outsiders, followed by three ballads where she was accompanied only by piano.”

Lorde’s Boston show, part of the Aucklander’s North American tour throughout March and April 2018, was “one of those parties that, thankfully, made good on its promise of unbridled fun.”

After a show in Nashville on 15 April, Lorde heads to Europe where she plays in London at Victoria Park on 26 May and in Russia on 29 and 31 March.