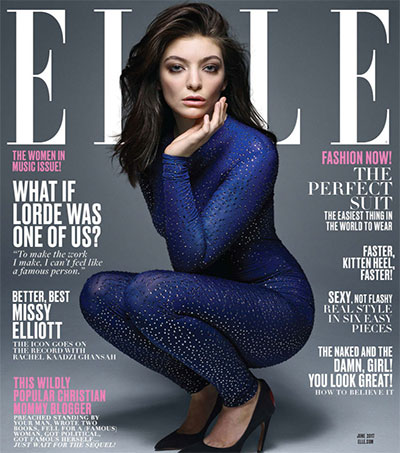 In the news yet again this week, just ahead of the release of her long-awaited second album Melodrama, Auckland-born mega star Lorde, 20, dresses up in a Dior jumpsuit for the cover of ELLE’s June Women in Music issue.

“After four long years, pop saviour Lorde has soared back onto the charts with a new adult perspective, an experimental sound, and a sophomore effort guaranteed to put all one-album-wonder doubts to rest, once and for all,” the magazine writes online in a preview of the cover story.

For the issue, Lorde talks breakdowns, her new sound, and exactly what she’ll be doing for the next two years.

“Everyone’s making music in LA now – which is great if you aren’t the shyest, most introverted nerd. I found it a little too social. I made my first record in New Zealand with very little discourse – I was just my own unit. In LA, it’s very, ‘Oh, what project are you working on?’ I was like, ‘I need to be out of this,’” Lorde tells the publication.

“New Zealand” is the reason Lorde says she can balance her celebrity status and personal creative process.

“That’s why I am so passionate about going home,” she says. “Most of my friends are people I knew before I was famous. I’m very thankful that I never feel like the smartest person in the room, or the coolest person in the room, or the funniest. When I’m there, I’m just there. People forget that I’ve done anything. They say, ‘Ella’s this weird old dowager with a nice house.’”

Lorde performs at the Governor’s Ball in New York on 2 June.