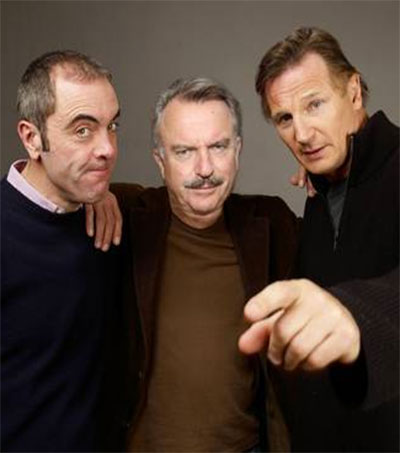 With a Little Help from Sam Neill’s Friends

Hollywood star Sam Neill may originally hail from Northern Ireland, but he has just confessed to having a little difficulty mastering an Ulster accent for television drama series Peaky Blinders – despite help from fellow actors Liam Neeson and James Nesbitt.

Neill, a naturalised New Zealander who was born in Omagh – his father was a Harrow– and Sandhurst-educated British Army officer and third-generation New Zealander, spent most of his career playing Americans, Englishmen or Australians. But in the hit show he spoke with a Belfast accent that the Age newspaper described as “brutal”.

“I’m not sure if the accent was meant to be purely Belfast but it was certainly Northern Irish,” said the 68-year-old, who plays the morally corrupt Major Chester Campbell in the critically-acclaimed series about a family of gangsters from Birmingham.

“I’m sure if you’re a native of Belfast you’d probably hate it, but I learned to love it because it’s so flexible.”

Neill said Neeson and Nesbitt were a big help – although neither of them hail from Belfast.

“I had one session with Liam and one with Jimmy, who are good friends,” said Neill, whose father, an Army officer, was stationed in Northern Ireland at the time of his birth in 1947. “Those two grew up only a few miles away from each other in Co Antrim, but they have entirely different accents.”

The Jurassic Park star’s next TV outing is in the four-part ITV drama Tutankhamun, which tells the story of the men who discovered the tomb of one of ancient Egypt forgotten pharaohs in the early 20th century.