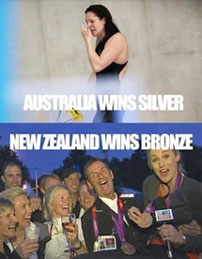 Lapping Up the Medals

New Zealand supporters in London have been enjoying the unusual experience of being ahead in Olympic medals over Australia. At Kiwi House Jessica Middleton, 24, wearing a T-shirt emblazoned with the colours of the alphabet in Maori, said: “In New Zealand, if you get a medal in anything you will get a parade in your own town.” Official Australian Olympic broadcaster Channel 9 avoided showing New Zealand’s ascent up the medal table, showing only the nine top countries, followed by a gap, followed by Australia.