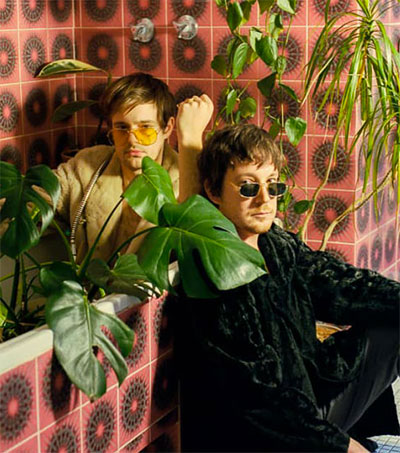 “What do you expect from a band named Krispy & The Pooch? Approaching their music, we weren’t too sure,” Sydney music site, Happy reports. “With their wild band name and even wilder cover art, the New Zealand-born and Berlin-based duo built a pretty crazy reputation for themselves, even before their first slice of music had been released.”

“But now, here we are. The band’s new EP Something Strange For Change has arrived, and we can confidently say that their music is every bit as brilliantly insane as we had hoped,” Happy writes.

“Throughout the new EP, Krispy & The Pooch – made up of Simon Townsend and Kriston Batistic – glide through an irresistible concoction of funk, soul, pop, and psych to craft a sound uniquely their own. With jazz-laden guitar lines, deeply infectious bass lines, and sultry vocal hooks, the duo has developed a sound that feels simultaneously energetic and composed.

“The EP’s closing track, The Market, is easily the release’s most experimental. Driven by spacey synths and vibrant electronic beats, the song feels like the soundtrack to some drug-fuelled, retro-themed nightclub. By the time the track reaches its conclusion, you’ll have been roped in completely to Krispy & The Pooch’s idiosyncratic synth-funk sounds.

“These are still early days for this Kiwi band, but judging by everything we’ve heard so far, I think we can safely expect plenty more quality tunes.”