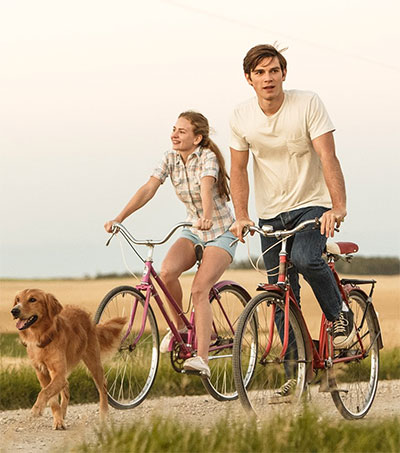 Based on author W. Bruce Cameron’s beloved best-selling novel, A Dog’s Purpose tells the heart-warming and surprising story of one devoted dog who finds the meaning of his own existence through the lives of the humans he teaches to laugh and love.

Apa, 19, plays the teenaged Ethan (while Dennis Quaid plays him as an adult). Brand new to the world of feature films, Apa was in for a treat when he joined forces with veteran director Lasse Hallström. “This was my first film, and I did not know you could suggest different ideas to the director. In my television work previously, I did exactly what was on the page,” Apa says. “Improvising came pretty easy for me.”

Apa, who is from Auckland where he attended King’s College, elaborates on the challenges he faced while playing young Ethan: “The hardest part of the job was perfecting an American accent, and learning how to throw a football. I play rugby, and the throwing motion could not be more different.”

Asked what other kinds of roles does he hope to play in the future, Apa answers, “I’m still grasping what it means to be an actor. At the moment, I really want to do action. I feel like I really want to be more physical. And I feel like action movies will give that to me. I definitely want to make movies after doing A Dog’s Purpose.”