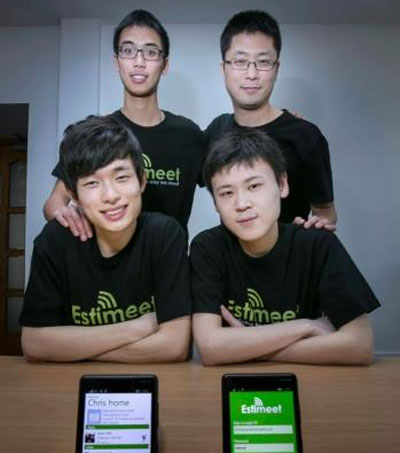 A group of aspiring technologists from the University of Auckland have taken out one of three grand prizes and won $50,000 at Microsoft’s Imagine Cup in Seattle.

Team Estimeet members Hayden Do (19), Jason Wei (19), Chris Duan (30), and Derek Zhu (22) designed the app to track the real-time locations of people making their way to business or social meetings.

“We did a survey and found that people don’t use location data because of issues of privacy,” Hayden Do told the University of Auckland. “We thought that these types of Apps have huge potential but no-one is using them and so that’s why we designed Estimeet to protect people’s privacy.”

Thirty-four student teams from 34 countries competed in the Imagine Cup finals after winning national and online competitions around the globe.

Over the past 12 years the Imagine Cup has empowered more than 1.7 million students worldwide to do more and achieve more through technology.

“Imagine Cup empowers students to hack tough problems, while learning and building off the work of others.”

Team Estimeet is the first New Zealand team ever to win a top category at the Imagine Cup.

As part of their prize, the team will take part in the Microsoft Ventures Boot Camp which focuses on career skills and project support.

Image from the University of Auckland.