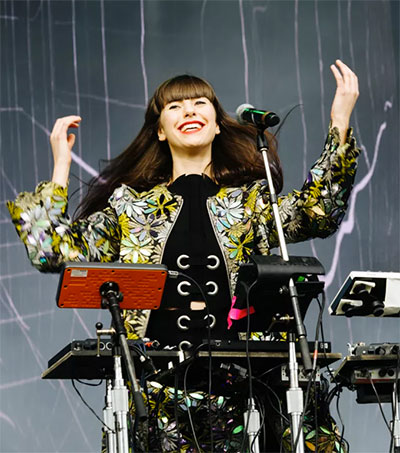 Humility and elegance only begin to describe the essence of what makes New Zealander Kimbra such an unstoppable pop music force, according to EDM blog Magnetic Magazine.

Kimbra, 27, is pop music royalty. With queen-like grace, she unabashedly pursues the expansion of the genre’s landscape, taking us to uncharted territories filled with sounds the likes of which we’ve never heard.

Her live performances leave nothing to be desired, as she takes full responsibility for playing her music as close as possible to what she meticulously crafts in the studio. Recently she stopped by Houston, Texas to play a set on the main stage of Day For Night festival and it was far and away one of the best performances of the weekend.

Kimbra explains how she first found her confidence.

“I started writing on little dictaphones when I was 8 years old,” she says. “I would sing the melodies that I heard listening to the pop music on the radio. I was fascinated with the structure, the verse the chorus, and I’d write these silly little songs.

“At 12 years old I started playing guitar, learning Stevie Wonder songs, getting really deep into R&B chords and jazz chords. At 14 I entered into a competition in New Zealand, which was my first true boost of confidence. I came second in the country, at which point someone told me that I could turn it into a professional career. That gave me the strength to try.

“I have a new album coming out [on 19] January called Primal Heart. This album is different for me because I feel it’s the most personal. There were more characters on the last album; more dancing around and surrealism. But these songs have a sense of groundedness and tell stories. It feels like I’m really just hanging with someone and telling them what’s up with me. In a way, I feel more connected to my audience on this record than I have in the past.”

Kimbra is on tour in the United States throughout January and February beginning in Boston at the Paradise Rock Club on 28 January.