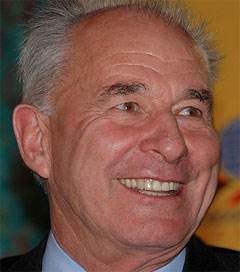 Sir Don McKinnon appeared on a BBC ‘Daily Politics’ segment arguing that the Commonwealth is a “pretty good investment” for Britain but it has not “always used it best”. The New Zealander was the fourth Commonwealth Secretary General from 2000 to 2008. McKinnon told BBC journalist Jo Coburn about how he dealt with some of its more difficult leaders. He also said the Commonwealth meant the UK had “54 friends out there” and how Britain put £350 in to the EU, for every £1 it put into the Commonwealth. McKinnon currently sits on the Board of Advisors of the Global Panel Foundation.