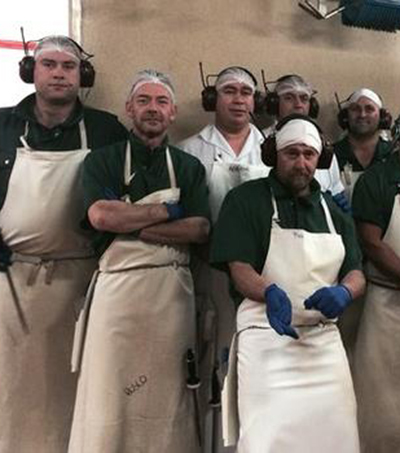 Shawn Parkinson (pictured, far left), one of the butchers, explains that the journey takes 22,300km each way.

Every September, he and 30 other New Zealand butchers travel to Iceland for its lamb processing season.

It’s an annual trek Mr Parkinson has done for the past seven years.

“My friends say ‘Iceland? What do you kill there – seals?’ Nah, they’ve got their own breed of sheep.”

“We’d be out of work if we stayed in New Zealand at this time of year. It’s off-season. We’re laid off,” he tells Megan Lane of BBC, during his morning break at the SAH Products slaughterhouse near Blonduos.

“This is the experience of a lifetime. It’s the other side of the world and you can still get a bit of work.”

Flights and accommodation are paid by their Icelandic bosses – who struggle to find trained locals for just eight weeks’ work – and the wages are similar to those found in New Zealand.

“Of the nine fellas here [at SAH], seven have been before and two are new,” says Mr Parkinson. “There are other Kiwis in Saudarkrokur, Selfoss and other places I can’t pronounce.”

Parkinson feels a kinship with Icelanders. “They’re descended from the Vikings and we are mostly Maori, so we share a warrior history and a similar attitude.”

Their Icelandic boss, Gunnar Halldorsson is impressed with their work. “The Kiwis are reliable workers – never sick, always do a 100% job,” he says.

“It is expensive for us to fly them over and fly them back home and they know it. They appreciate it. You can feel that they are doing their best.”