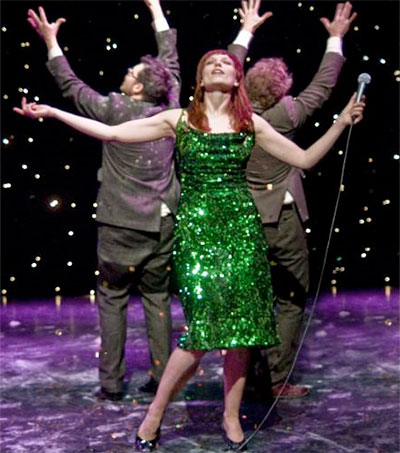 McIntosh, as a shimmering-cocktail-gowned MC, and two lab assistants lead the audience along avenues of inquiry that often lead to dead ends. No matter. So many of the theories of quantum physics are at such early points in their development that misunderstanding is a frequent byproduct of trying to explain them.

“And that leads to a great deal of fun,” she said. “We’re building theatrical metaphors to challenge complex scientific hypotheses and when you do that, things such as condensing 100 per cent darkness into a paper bag or pouring a glass of reality becomes possible, if not exactly scientifically supported.”

McIntosh was a founding member of the Belgian performance collective and punk rock band Poni, and she holds an MRes in Performance and Creative Research from Rockhampton University.

She is also a founding member of SPIN, an artist-run production and research platform based in Brussels.