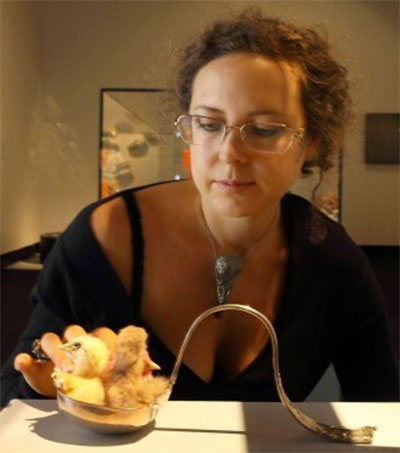 Melbourne-based, New Zealand-born artist and jeweller Julia DeVille has received the A$30,000 Waterhouse Natural Science Art Prize, which was presented to her at the South Australian Museum.

The award was for her work Neapolitan Bonbonaparte, which features a trio of taxidermied chicks, whose feathers are dyed in the colours of Neapolitan ice cream, sitting in a sterling silver vintage ladle.

DeVille said she used human hair dye to get the shade she wanted on the birds’ feathers.

“Before I taxidermy the chicks I dye them first, then wash it out and blowdry them like a little salon, then do the taxidermy after that.”

The work was a commentary on industrialised agriculture and the use of ethically sourced eggs in food, she said.

The Waterhouse Prize’s judges said deVille’s work opened a “challenging dialogue about our consumer society today – the difference between appearance and what lies beneath, between perceived truth and the actual truth.

“This duality is depicted in a work that is both beautiful and grotesque, which attracts whilst at the same time repels.”