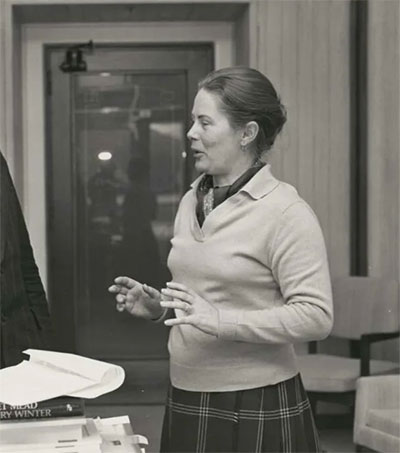 The late Gay Davidson has been inducted into the Australian Media Hall of Fame. The New Zealand-born journalist, who died in 2004, had the distinction of being the first female political correspondent for a major newspaper in Australia and, by extension the first woman in the Canberra Press Gallery, where she famously insisted on a ladies’ lavatory.

Davidson was also a prolific writer with a deep understanding of politics, public policy and economics, reflected in her writing.

“Gay was a damn fine journalist in everything she did at The Canberra Times – she invented and laid the pattern for Gang Gang, the column on page 3,” colleague, Canberra Times’ former editor-at-large, Jack Waterford said.

“She knew an awful lot about health and health politics, and she was terribly well connected to the bureaucracy. If you ever went over to the home she shared with her then-husband Ken Davidson, it was sort of veritable salon of journalists, public servants, politicians there, talking freely and essentially off the record, about things that you ought to know about,” Waterford said.

Davidson was also a passionate public health campaigner, driven in large part by the death of her 13-year-old daughter Kiri from complications from a childhood case of measles in 1984.

She would go on to use her expertise and contacts to make politicians, health officials and the public far more aware of the risks of measles, then regarded by many as a harmless childhood disease.

She eventually left the profession to work in public relations, and worked on various boards and local causes.

“She was a New Zealander originally, but a real Canberra citizen,” Waterford said.

Photo by National Library of Australia.