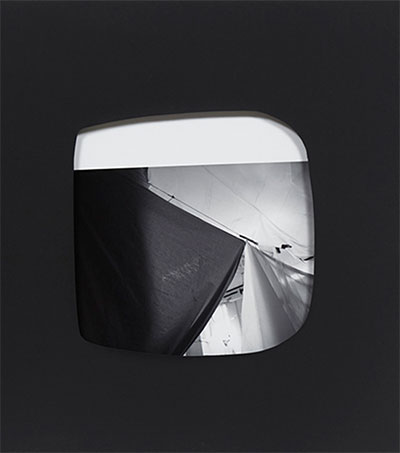 “At first glance, the work in ‘Athenree,’ the new exhibition by New Zealand-born, Brooklyn-based artist Jude Broughan up now through 25 February at New York’s Benrubi Gallery, is hard to dig into,” according to BLOUIN ARTINFO correspondent Taylor Dafoe. “[But] the result is almost elegiac, capturing the fractured ways in which memory is divvied up and imbued into objects of the everyday.”

“Comprised of printed photographs and various textiles, sewn or affixed together in a frame, the body of works elude categorisation. They exist somewhere between photo-sculpture and mixed media collage. They’re slapdash and crudely arranged. The photos are obscured, out of focus, or nondescript. Many of them look like outtakes and misfires, or maybe snapshots edited from a family album: a corner of a workspace, for example, or a gradated sky at sunset. The fabric is ripped and torn, like it was sourced from a tailor’s trashcan. The stitching meanders like the steps of a drunk,” Dafoe describes.

“It’s tempting, given the lack of immediate footholds, to approach Broughan’s work in this show as photographic. It’s not an illegitimate interpretation. For one, the hosting gallery, Benrubi, is primarily a gallery of photography. For another, each work employs an individual photograph as its central point of focus, with the rest of the diverse materials, including linen, leather, polyester, and vinyl, attached. Yet, despite the fact that it’s so in touch with the language of the medium, the majority of the work in ‘Athenree’ is not really photographically oriented. For Broughan, the photos – indexical, inscrutable; autonomous objects unto themselves – act as just another material in her abstract assemblages. The whole is more than its parts.”

Athenree is a tiny beach town in the coastal Bay of Plenty. It was named after the Northern Irish “townland” that is home to the monolithic Athenree Portal Tomb.

Broughan was born in Hamilton in 1976. She holds an MFA from Hunter College, City University of New York and is a graduate of Elam School of Fine Arts.