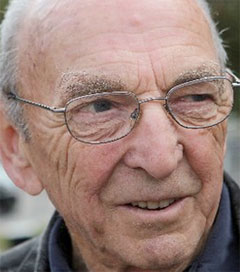 Artist Bill Culbert is representing New Zealand at this year’s Venice Biennale with a series of three-in-one works occupying nine rooms in the Istituto Santa Maria della Pietà, including the ongoing Daylight Flotsam Venice. “Culbert has been an art world secret for too long,” according to Coline Milliard for Blouin Artinfo. The London- and Southern France-based Culbert belongs to the league of the Dan Flavins and Mario Merzs while, at 78, not yet having enjoyed the recognition he deserves. This is no doubt about to change.  Located in the Istituto Santa Maria della Pietà, an atmospheric former music academy a stone’s throw from San Marco, his pavilion is a must-see of this year’s Biennale. Light has been Culbert’s primary material for decades, and neon strips feature here in most pieces, contributing to the fetching coherence of the sculptural ensemble. In the entrance’s long corridor, chairs pierced with neon tubes hang from the ceiling (Drop and Bebop, 2013) – a modernist, gently mocking take on the Murano chandeliers gracing so many of Venice’s crumbling palazzi. In contrast to the works of Flavin — all pure, pulsating lumens bouncing off the surrounding pristine white cube – Culbert’s assemblages radiate a down-to-earth energy. They are at once intriguing and familiar, both a commentary on and part of everyday reality. The exhibition continues with two mirrored wardrobes, each punctured with three neon tubes (Walk Blue and Walk Reflection, 2001-2013), and standing in the courtyard like retro-futurist monuments. In a room directly opening on the canal, a floor of light strips and plastic bottles lie intermingled, as if deposited in the wake of a major tide (Daylight Flotsam Venice, 2013). Level (2013), which is placed on the high beam of a door opening directly onto the canal, features seven jars half-filled with a transparent liquid to form a line echoing the water below. Talking to the pavilion’s curator Justin Paton, Culbert said ‘the simplest and cheapest material to me is often the most stable and the most exciting.’ His confidence with mundane objects and his savvy use of electric light paved the way for the likes of David Batchelor and rising star Haroon Mirza, awarded the Silver Lion at the last Venice Biennale. As a precursor to these artists, Culbert is understated, but also both exciting and innovative. His place in the history books should be reappraised, and this stunning pavilion could well do just that.” Culbert was born in Port Chalmers in 1935.