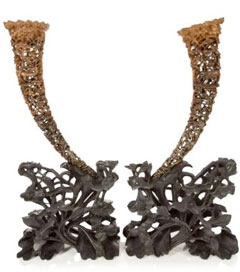 The room watched on in amazement as two keen bidders fought gallantly to secure the horns, leaving behind three other contenders at the $500,000 mark.

According to Webb’s, “global demand is extremely high for carved rhinoceros horns and scarcity has driven prices to unsurpassed levels over the last decade.”

“The strength of the market today is also linked to the immense rarity of these objects: it is believed that there are no more than 3000 to 4000 extant carved horns worldwide.”

Adding to the desirability of the horns was the fact that they were formerly in the collection of distinguished High Court Judge and noted anthropologist Sir John Budd Phear.