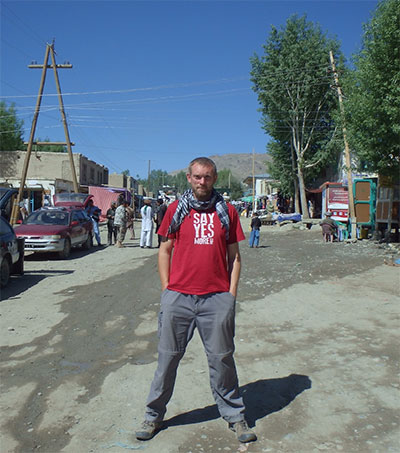 New Zealand-born Jon Beardmore doesn’t like cricket – he loves it. So much so the London-based adventurer drove solo halfway across the planet, almost 50,000km, for a few overs in Afghanistan, an odyssey that also took him through some of the most hostile places on Earth, including Ukraine and Pakistan. Telegraph Travel tracks him down.

Beardmore was also on a mission to dispel myths about countries that only ever make headlines, in the West at least, for the wrong reasons: think bombings, kidnappings and military insurgencies.

“I wanted to go and explore for myself rather than taking the media’s word for it that these were places that you shouldn’t go to. I wanted to go and meet local people and find out what their lives are really like,” Beardmore explained.

Beardmore, who works as a freelance management consultant for the railway industry – a high-pressure job that makes Afghanistan look all the more appealing, he says – gathered 200 hours of footage during his trip, completed in a 1994 Toyota Land Cruiser named Boris, which has been made into a documentary called The Great Game – 30,000 Miles Across Central Asia.

The film screened at the recent Adventure Travel Film Festival in London, which is fitting given that the festival inspired him to embark on the journey in the first place.

“I thought ‘wow, there’s people here going off and making films and coming back – why can’t I?’” he said. “So I thought I’d give it a go. Five years later that circle is now complete and I’m going from an attendee to a presenter.”

Beardmore embarked on the road trip in 2013 and has spent the last two years producing his documentary, which chronicles his progress through Europe, Russia, central Asia, southern Asia, south-east Asia and back.

The most spectacular driving, claims Beardmore, was on the Karakorum Highway in Northern Pakistan.

“The top half, from the Chinese border, is the best piece of highway you’ll see in the world,” he said. “It’s in the middle of a mountain range that’s spectacular with no-one else around.”

Speaking of cricket, what of the match in Afghanistan, which, incidentally, took place in a village called Sarhad-e-broghil in the Wakhan Corridor.

“It was really special,” he said. “Kids from the local school came down and we had a 28 man game of cricket. It ended up being settled on the last ball of the innings.”