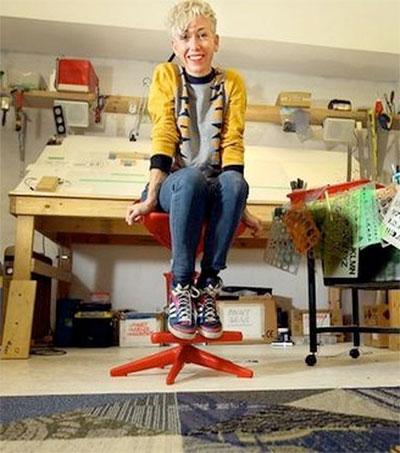 “[The] movement was started by an ex racing car driver in France in the 1970s and [it has] a belief system based around human cloning and aliens,” Johnson said. “I’m also influenced by film director Alejandro Jodorowsky and ​science fiction author Russell Hoban.”

“I don’t how to talk about the parallel realm [depicted in the paintings] at length very much,” said the former owner of Melbourne’s Hell Gallery, which she ran with Jordan Marani out of her home (the pair were invited to recreate the space at London’s Tate Modern in 2010).

“I don’t know if it’s something that exists only inside my mind or in some other multiverse out there. As time goes on, it does become clearer in my head. Just like in fiction, the repetition of figures gives more gravity to them.”

Johnson is one of five artists who have had art books commissioned.

Her work will find many new faces next year when she has a solo exhibition at the University of Edinburgh’s Talbot Rice Gallery.

“I’m going to feed my brain for three months and see as much art as I can. It’s very important to me, being face to face with art. It comes from growing up in a small town in New Zealand where there were no art galleries. I could only experience the art world through books.”