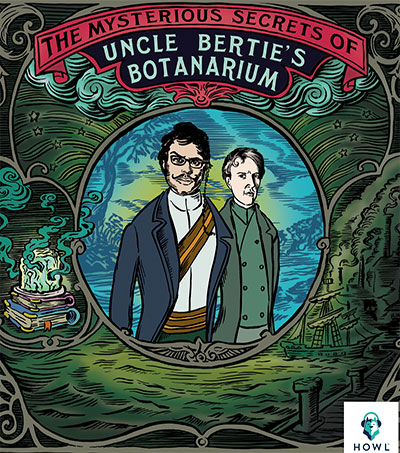 Jemaine Clement returns to radio playing Captain Cook’s botanist Lord Joseph Banks in the podcast The Mysterious Secrets of Uncle Bertie’s Botanarium, which is currently airing on the Howl app.

Written by fellow New Zealander Duncan Sarkies, Uncle Bertie’s Botanarium is different to a lot of radio plays. Episodes took days to produce, in part because Sarkies, artist Stephen Templer and musician James Milne (aka Lawrence Arabia) were dedicated to capturing the appropriate ambience for each scene. It was often recorded on location, which is almost unheard of for scripted radio productions.

“These guys went to great lengths in capturing the soundscapes,” Clement explains. “Say if we went to an island in the radio play, we’d actually go to, not an island, but we’d go to a hill near a beach. We’d be outside. We wouldn’t just stay in the studio; we’d go to locations often. That’s pretty unusual. I’ve never come across that in a radio play before. But these guys are trying to make a period piece so they can’t have any cars or anything. They have to go a bit further to capture what they wanted.”

Although the show is about a New Zealand legend and was produced entirely in New Zealand, it was always targeting an international audience. It landed at Howl, the premium wing of the Earwolf family, after a brief dalliance with the BBC.

The first season of The Mysterious Secrets of Uncle Bertie’s Botanarium debuted on Howl earlier this month, and new episodes premiere every Wednesday. Shortly after that season ends, Clement and Bret McKenzie will be returning to the States for a Flight of the Conchords tour.