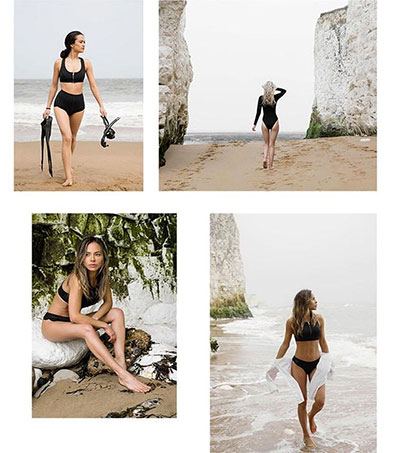 New Zealander Janaya Wilkins grew up exploring the country’s beaches and the sports they entailed, Esha Chhabra writes in an article published on the Forbes news site. After travelling the world, Wilkins returned to the oceans of her childhood with SLO, her new venture (short for “sustainable luxury oceanwear”), which makes swimsuits out of Yulex, a material that has been heralded by outdoor brands such as Patagonia.

“I found myself looking for a new career, a career with a purpose, after working in an agency environment for longer than I had intended. The idea was to take what I love and am passionate about – ocean conservation, what I’m good at, and fuse the two together,” she tells Forbes.

“We are determined to prove that there is a smarter and more sustainable way to consume goods, without compromising on design, quality and the planet. Every time we make a purchase, we make a vote for the kind of world we want to live in.

“What we have seen in the swimwear market as its grown over the past two years, is that many brands are making their sole message about claiming to clean up the ocean simply because of using one textile alone, such as ECONYL®, an amazing cutting-edge textile made from various plastic waste, in isolation of any real action. We fully endorse raising awareness around the critical issue of plastic pollution. It’s the reason SLO active exists, but we advocate a more active approach for the cause, such as physical beach cleanups, lobbying and other grassroots activism. Also, many fast fashion brands that use sustainable textiles are still producing at such volume and rate, with fast moving seasonality at its core, that it defeats the purpose, adding to the problem by sending more fashion waste to landfill. We advocate slow fashion, conscious consumerism and purchasing with purpose and intent.”

“We waited a whole year to have access to Yulex as a textile. I was determined to launch with Yulex as it’s the most sustainable neoprene option since the raw source comes from a renewable source, hevea trees, and is not a product of mining, limestone neoprene, or drilling, which is petroleum-based neoprene. Yulex also relies on zero-waste processing and is manufactured in a Fair Trade facility. We have a rigid criteria for every point in our product lifecycle. I’m so happy we stuck to our principals, as it’s resulted in something exceptional that we are truly proud of.”