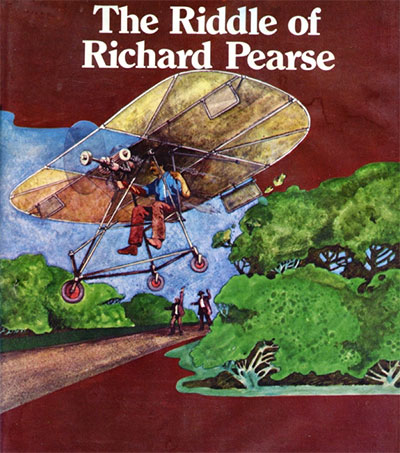 “Richard Pearse, a New Zealander, is remarkable for very nearly being the first to fly under power and control. The more remarkable for also designing and making the engine for the aircraft,” Joseph May writes for the Seattle Post-Intelligencer in a review of Gordon Ogilvie’s 2003 book, The Riddle of Richard Pearse.

“Even more remarkable for designing and building an aircraft and engine with no engineering education or outside assistance (except for a machinist in the early stages). But he did more. The man’s life redefines the term, remarkable,” May writes.

“I became interested in Richard Pearse after reading of an argument that he may have been the first to fly as we know it today. He wasn’t but he was nearly so. He flew under power, there is little doubt of that and his self-designed engines had power-to-weight ratios far better than those of the Wright Brothers as well as Glenn Curtiss.

“The fact that he accomplished this alone and in isolation (New Zealand was a distant corner of the world back in his day) makes for an incredible tale.

“Ogilvie’s book is as complete an investigation as I have read on Richard Pearse. Ogilvie interviewed relatives and neighbours so that readers could get a sense of how Pearse thought and felt. The research and writing are done well and cannot be surpassed. Unusually, Ogilvie goes beyond what other authors have done in mentioning that Pearse not only passed away in Christchurch, but he was cremated with the ashes scattered where a rose tree was planted. The location of the rose tree wasn’t mentioned, arg! But the photos and insights of the book are more than worth the read. Well done, Ogilvie!”

Christchurch-born Gordon Ogilvie was a historian and biographer who wrote over 20 books. He was appointed an Officer of the New Zealand Order of Merit in the 2008 New Year Honours for services to historical research.

Ogilvie died in Christchurch in 2017.