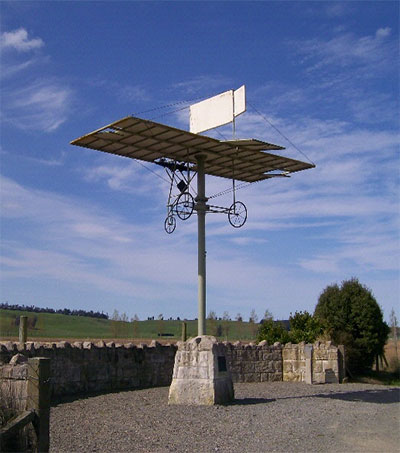 “The story of human flight is filled with many daring characters, and even more provisos: was it manned, powered, heavier-than-air, controlled, sustained, with a pilot on board?” Glorfeld writes.

“Many flying pioneers were keen to claim the honour of being the first to take to skies – or at the very least of having left the ground. But one early aviator was equally adamant that he was not the first man to achieve powered flight: Richard William Pearse, born on 3 December 1877, at Waitohi Flat, Temuka.

“A 2003 History Channel documentary, Heavier Than Air, by filmmaker Simone Keith, focuses on Brazilian-born aviation pioneer Alberto Santos-Dumont, who lived most of his life in France. On 23 October 1906, flew his aircraft, the “14-bis”, in what was the first powered, heavier-than-air flight in Europe to be certified by the Aero Club de France, for a distance of 60m at a height of about five.

“According to the online magazine LiveScience, however, America’s renowned Wright Brothers, Wilbur and Orville, in a field near Kitty Hawk, in North Carolina, achieved what is ‘properly called “the first manned, powered, heavier-than-air and (to some degree) controlled” flight’, on 17 December 1903. With Orville at the controls, their machine was in the air for 12 seconds and travelled 37m.

“Simone Keith, writing in the North Carolina State University magazine Perspectives, says the debate over who was first in the air is centred on whether the Wright brothers’ 1903 flight had additional help to get airborne. ‘Supporters of Santos-Dumont say the Wrights used a rudimentary catapult system on an inclined plane to throw their machine into the air,’ Keith says.

“And then there’s Pearse.

“There was reportedly ‘a good deal of eyewitness testimony, able to be dated circumstantially’, that 31 March 1903, ‘was the likely date of this first flight attempt’.

“If the witness reports are correct, his flight pre-dated both Santos-Dumont and the Wrights, but the New Zealander never attempted to claim the crown.

“[Pearse’s] innovations were largely ignored and [he] became ‘embittered, disillusioned’. He was admitted in June 1951 to Sunnyside Mental Hospital, where he died on 29 July 1953.”