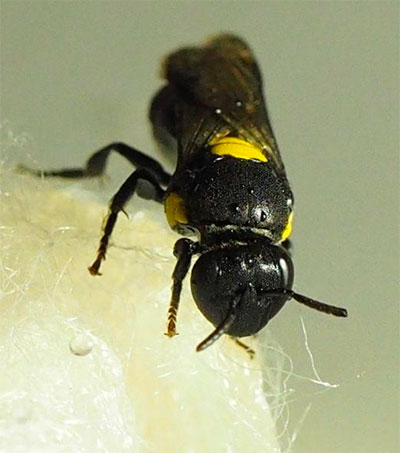 When New Zealander Veronica Harwood-Stevenson, 33, a trained reproductive biologist, gambled her life savings on research into a rare species of bee, she had no way of knowing whether it would pay off.

Harwood-Stevenson had a hunch that the cellophane-like substance in which the Hylaeus bee breeds its larvae could replace toxic chemicals used in plastics.

The idea, inspired by a chance reading of an academic paper while trying to distract herself from a job in film distribution, set her on a completely new life path.

“The results were good,” Harwood-Stevenson told the Thomson Reuters Foundation. “I had just spent my life savings, so I was relieved.”

After she chased around rugged bush to catch specimens, tests revealed that as well as being waterproof, the bee’s nest lining was resistant to fire and certain acids, giving it a wide range of potential uses.

Harwood-Stevenson’s research company Humble Bee, a Wellington-based startup has raised $320,000 in private funding as well as a $120,000 government-backed grant since its inception in 2011.

Dissecting the minute bee, which measures no more than 12mm, to extract its microscopic glands has allowed Humble Bee to chart a chemical pathway to replicate the precious nest lining.

Extracting the genetic code behind the material, the company’s current focus, holds more promises as it would make it cheaper to manufacture and selling the material at a more competitive price, Harwood-Stevenson said.