NZEDGE  >  News  >  Arts  >  How Flight of the Conchords Outlasted the Hipster 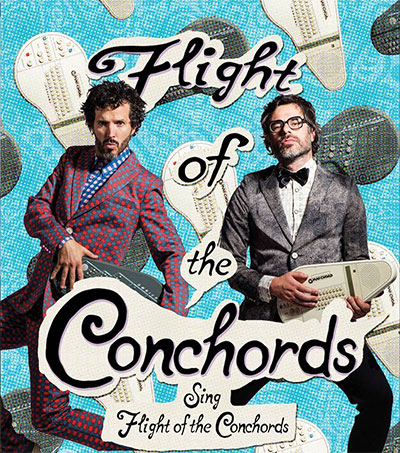 How Flight of the Conchords Outlasted the Hipster

“Despite breaking out at a specific cultural moment – an era during which America, at any rate, was seething with ironic hauteur and fetishised authenticity – [the Flight of the Conchords’] penchant for loving parody turned out to be evergreen in ways no one suspected,” Lili Loofbourow writes for news magazine The Week.

“Seven years after leaving their show and three years after their last tour, Flight of the Conchords’ 2016 summer tour sold out almost instantly, forcing them to add five extra concert dates to accommodate fans at venues including Mountain View’s Shoreline Amphitheater, a behemoth built on a landfill and rimmed by the eerie Google campus. It seats 22,500.

“You can imagine my surprise when I learned I’d be seeing them there – this charming duo I’d associated with torn wallpaper act breaks, crappy production values, and a resolutely analog sensibility. The giant lifeless heart of Silicon Valley? What had the Conchords become?

“It’s a question that has plagued the group since it began. You’ll recall that the hipster constituted a slippery category back in the aughts (when people still cared about that kind of thing), but most people agreed on his telltale phrase: ‘I knew them before they were cool.’ The question driving a lot of cultural coverage back then was how (not when) a band or comedian would sell out, and coverage of Flight of the Conchords while they were still on TV reflects this. ‘Will success spoil Flight of the Conchords?’ Maxim wondered. ‘Can Flight of the Conchords avoid the fact that they are fully fledged music superstars?’ asked the Guardian. While no one would admit to being a hipster, many shared this sense that creative faculties get shallower and shinier the more time someone spends in the spotlight. Seven years is a long time, and it’s hard to get shinier than a Googleplex-adjacent amphitheatre.

“The early aughts needn’t have worried: FOTC has figured it out. The guys are pretty resistant to celebrity’s siren songs, and they’ve slowly and thoughtfully scaled up their tolerance to fame and their act. Their improv still feels fresh. Their act still feels intimate. They’ve rejected the crappier attributes of fame without being squeamish about giving fans what they want, whether it’s pinup material in Maxim or showing up to interviews in a crop top.

“They cleverly use their aging (and ours) to pivot to their newest material: ‘We’ve grown older and we’ve started to appreciate jazz music,’ Bret says, introducing an effective and extremely loving parody of Tom Waits, ‘Shady Rachel’. (Of their new stuff, it’s possibly their best, secondly only to ‘Seagull,’ an homage to yacht rock.)

“It’s easy to see why rumours of a FOTC movie keep catching fire: The guys have held onto the real thing. Their impressions are razor-sharp, their vocals show huge range (McKenzie’s especially), and their comic timing is better than ever (Clement’s in particular).

Tags: Flight of the Conchords  Week (The)