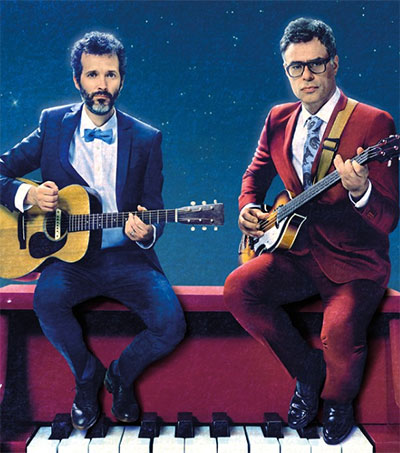 Live in London marks the duo’s first recorded release since 2013’s charity single “Feel Inside (And Stuff Like That)”, which received a New Zealand Music Award for highest-selling single. The new album will feature seven brand new songs, including the already-released singles “Iain and Deanna” and “Father and Son”, as well as performances of their classic hits “Robots”, “Bowie”, “Inner City Pressure”, “Foux du Fafa”, “Mutha’uckas – Hurt Feelings”, “Carol Brown” and “The Most Beautiful Girl (In the Room)”.

Both Clement and McKenzie have been busy since their last run as Flight of the Conchords. McKenzie has gotten into music supervision for film, and led the soundtracks for The Muppets and Muppets Most Wanted. He even won an Academy Award for Best Original Song in 2011 for “Man or Muppet”. Clement dove into voice acting in the intervening years, with featured roles in animated films like Rio, Moana, and The Lego Batman Movie. He also directed his first feature film with Taika Waititi in 2014, the horror-comedy What We Do in the Shadows. He currently appears in a regular role as Oliver Bird on the series Legion.