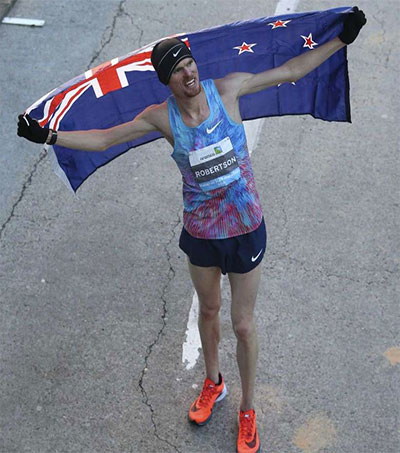 Distance runner New Zealand-born Jake Robertson, 28, the new Aramco Half Marathon champion, didn’t know for sure he would be running in Houston, United States until a week prior to the event, when race organisers finally confirmed they had a spot for him.

He had made a late December decision to get into the Houston field.

“I was a little bit overdone – I was still in hard training,” Robertson said. “I paid out of my own pocket to [fly] business class so I could sleep a bit. It was worth it.”

“I was hoping for a course record,” said Hamilton-born Robertson, who has lived and trained in Kenya for more than a decade, reasoning that to compete with the best he has to work with the best. “But early on, we got some slow k’s and after that I was just trying to win the race.”

The unexpectedly cold weather was an issue for all the runners. In Kenya, Robertson does his hardest training when the temperatures are [between 5 to 10 degrees Celsius]. It was [1 degree Celsius] at the 7 a.m. start.

“We train in Africa at altitude, and it gets cold there but not quite as brisk as this,” Robertson said. “The muscles, especially the hamstrings, almost cramp so getting to that top gear … you almost get stuck.”