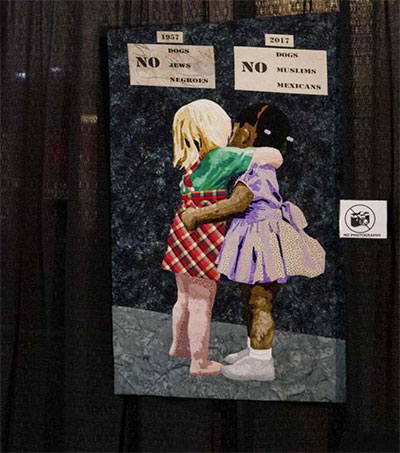 New Zealand-born cancer epidemiologist Mary Jane Sneyd is exhibiting “Colour Blind” at the 2018 International Quilt Festival on in Houston in the United States from 9 until 11 November. The theme this year is: “OURstory: Human Rights Stories in Fabric”, and includes 42 art quilts, each of which touches on a different human rights theme.

Sneyd, a longtime quilter, describes her own family as a “rainbow of colours” with people who are black, white, Māori, Congolese-Chinese, Sri Lankan, Japanese, Lebanese and Russian Jewish.

Her quilt is based on a photograph from her own seventh birthday party in 1967. Now 58, Sneyd was a little girl in Nashville, Tennessee, when her parents, both physicians, had moved the family there for a few years. The family had a black maid and nanny who had children the same ages as Sneyd and her siblings.

“When it was my birthday, naturally she and her children were invited to the party. That’s just the way we do things,” Sneyd said from her home in Dunedin. “Afterward, Mum has told me, that other mothers rang her and said their daughters could not come to the party because Negroes would be there.”

Sneyd’s mother didn’t worry about those who wouldn’t attend; the nanny’s children were coming to the party. “She’s a bit scrappy, my mum,” she said.

The children in the photo were Sneyd’s younger sister and one of the nanny’s daughters and the message in the photo from 50 years ago still rings true today, she said.