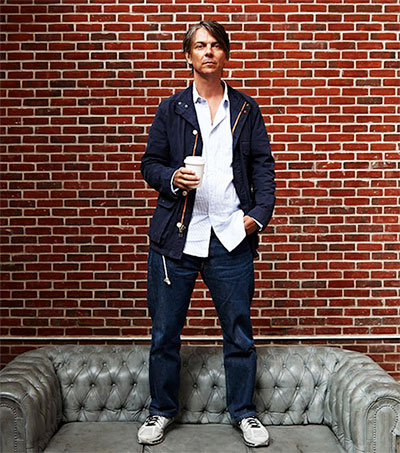 “Now he’s back, in a gritty-luxe neighborhood that remains one of downtown’s last luxury-hotel frontiers.”

“MacPherson and partners whose portfolio includes glam addresses like the Greenwich and Mercer Hotels, opened the 184-room Ludlow Hotel in September 2014, in a 20-story brick-façade, casement-windowed tower on the Lower East Side. That height, combined with lofty ceilings throughout, give it spectacular views over the neighbourhood’s low-slung tenements – and beyond.

“Inside, the aesthetic is a reflection of MacPherson’s nostalgia for the Lower East Side as it was when he first ventured there, in 1984. Then the area was still all ‘grittiness and nervous energy,’ in MacPherson’s words. ‘You had a sense something could break out any minute, whether it was street art or a riot.’

“It’s a far cry from the neighbourhood’s knish and kielbasa days – just like the whole hotel is a big step up from the area’s kitchens-in-bathtubs era.”

“Sean has a way of combining eclectic and disparate elements like a film production designer,” the acclaimed Italian video artist Marco Brambilla, who has been a friend for 20 years, told the New York Observer in June 2014. “He creates a place that only previously existed in his imagination yet taps into a familiar collective consciousness.”