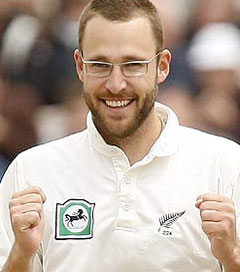 “Daniel Vettori’s New Zealand return is great news for all of us – one last chance to hail the ultimate sporting geek,” according to Telegraph columnist Jonathan Liew. “For one thing, he is one of Test cricket’s last remaining links with its pre-floodlit, pre-T20, pre-Elite Panel, pre-Gilchrist past, a decade that is increasingly coming to resemble something of a golden era. There has always been something unique and timeless about Vettori as well. For over a decade he has been the glue that held New Zealand together. Whether as hero or anti-hero, what is beyond doubt is that Vettori has never quite won the recognition he truly deserved … [he is] a fine bowler, a fine batsman [and] a fine servant to the game.” Vettori, 34, was born in Auckland. He is the eighth player in Test history to take 300 wickets and score 3000 runs and the youngest player to have represented New Zealand in Test cricket.