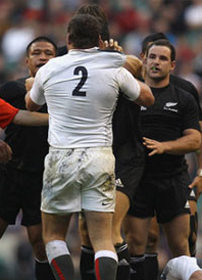 The New Zealand Rugby Union says it has no qualms with England wearing a black strip at this year’s Rugby World Cup. The Rugby Football Union said England will wear a black kit in the first of their World Cup matches against Argentina on 1 September. They will wear their traditional red and white strip in their remaining group matches but could revert to the black kit later in the tournament. Designers came up with the idea of a black kit to replace the grey, or anthracite, shirt 18 months ago and, mindful of New Zealand’s historic association with the colour, approached the country’s officials to seek their approval. All Black captain Richie McCaw refused to be drawn into a debate on the issue of shirt colour. “If it comes down to what colour you wear determines how you play, then we’ve got trouble,” McCaw said.