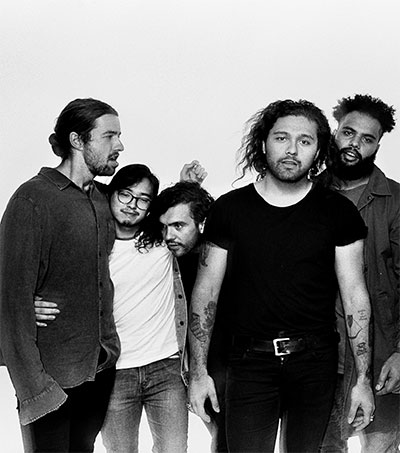 Founded in Sydney six years ago, Gang of Youths, which includes New Zealander Max Dunn on bass, are getting their share of attention in America after releasing two hit albums in Australia: 2015’s The Positions and 2017’s Go Farther in Lightness.

However, Dunn (pictured far left) recalls a 2014 tour of the US that was “completely worthless.” For one show, “We’d done a staggering 10-hour drive to play to 17 people, if you include the support bands.”

Dunn, 27, cites another early show in a Melbourne pub – for five people. “We literally played like we were at Wembley Stadium,” the bassist says, noting that one “dude in the back” was another New Zealander, the drummer in Shihad. “He was blown away. He was like, ‘Who plays like that to a pub this shit?’”

The band’s recent Bowery gig in New York, in contrast, was part of an acclaimed spring blitz that ran the gamut from a six-show rush at SXSW to an incandescent national-TV debut, performing Go Farther’s “What Can I Do When the Fire Goes Out” on Late Night With Seth Meyers.

Go Farther in Lightness was nominated for 8 awards at the 2017 ARIA Music Awards, winning four: Album Of The Year, Best Group, Best Rock Album and Producer of the Year.

Gang of Youths starts another North American tour in May and plays at Lollapalooza in August.