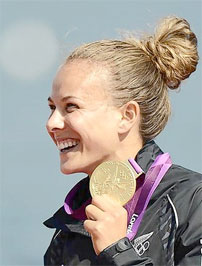 Full Paddle Ahead for Medal

Full paddle ahead for medalNew Zealander Lisa Carrington, 23, stormed to victory in the inaugural K1 200 on Dorney Lake at the London Olympics to give her country its first women’s Olympic gold medal in sprint canoeing. Carrington, who is from Ohope Beach, started surf lifesaving at a club near her home when she was 10 and by 2007 she was competing in the junior Olympics. At 1.68m, Carrington was one of the smallest competitors in the event but was confident ahead of the race that she could give Hungarian great Natasa Douchev-Janics and 2008 500m K1 Olympic champion Inna Osypenko-Radomska from Ukraine a run for their money. “I’ve got good power-to-weight ratio. I’m small but I’m strong,” she said. Earlier this week, Manawatu track cyclist Simon van Velthooven, 23, won a cycling bronze medal in the keirin cycling final.