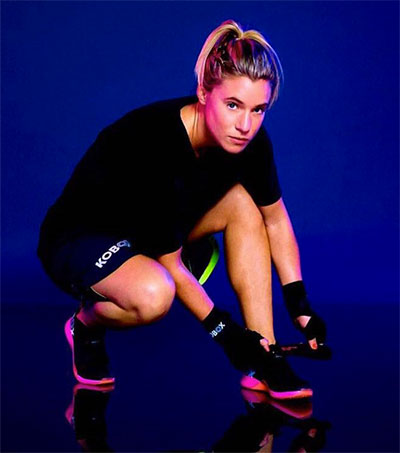 New Zealander Amy Andrew experienced “the greatest moment of her career” not long ago during a sparring session ahead of the Women’s Boxing World Championships in New Delhi.

“It was a mixed session. I looked around the room, Mary Kom was there and all the top people in women’s boxing were there. And I think to myself, ‘I can’t believe I’m here’,” says Andrew, who is representing New Zealand in the 57kg weight division at the Worlds.

Andrew says she never even considered a career in boxing or even cared much about the sport until she was about 26 years old. She had seemingly settled into a career then, heading the small business desk at the Mail Online newspaper in London. “I had watched Million Dollar Baby maybe one time in my career,” recalls the now 32-year-old, who won her first bout against Algeria’s Khelif Hedjila.

A pair of tickets gifted by her then boyfriend to boxing events at the London Olympics changed her career path. “I thought I wouldn’t be interested, but I was hooked,” she recalls.

What followed was a couple of white-collar bouts – in which professionals compete in an amateur setting. It wasn’t a completely smooth debut, Andrew recalls crying bitterly backstage at the prospect of getting punched. Yet once in the ring, she was smitten. The bug only grew until it was time for her to make a decision. A career switch at 30 isn’t easy, let alone a such a dramatic one. Yet Andrew decided to go ahead and make the leap to becoming a full-time boxer in 2014, training at London’s Haringey Gym.

Andrew doesn’t know what the future holds. “I never imagine myself here but now that I’m here I want to be among the best,” she says. Regardless of the results she’s satisfied knowing she is doing what she loves. “Having a fight in the horizon, that makes me get up in the morning. Having a fight is a great motivator because if you aren’t motivated, you get punched in the face.”