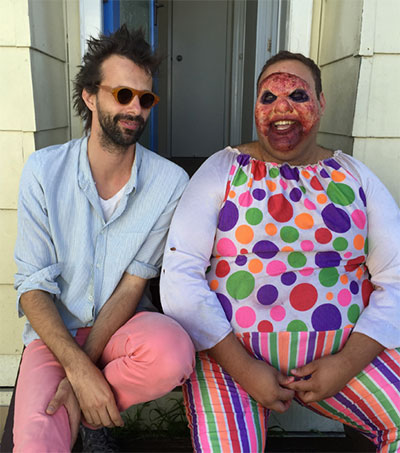 For his latest documentary, Spookers, which just made its world premiere at the Hot Docs Canadian International Documentary Festival, New Zealander Florian Habicht, 42, set his sights on something that has become an unlikely national institution in his country, Andrew Parker writes for Toronto-based online entertainment magazine, The Gate.

About 45km out of Auckland, Beth and Andy Watson have been running on of the most famous, notorious, and for some, terrifying, haunted amusement parks in the world. The titular Spookers is housed on somewhat innocuous looking farmland – yes, there is a corn maze – but the grounds and walls used to be home to the Kingseat Psychiatric Hospital, an institution that closed up decades ago, but for some still contains a lot of meaning and uneasy memories about time spent there.

Habicht (who most recently came to the festival with his films Pulp: A Film About Life, Death, and Supermarkets in 2014) traces the history of Spookers and showcases the experience of being there, but the main focus of the documentary is the people who work there, and what the time spent there means to them.

Outside of Beth and Andy’s loving relationship that keeps things going, many employees find the time they spend dressing up as zombies, ghouls, ghosts, goblins, monsters, killer clowns, and assorted psychos to be a form of catharsis. For many, Spookers is a side gig that allows for some stress relief, while others struggling with depression and feeling like they aren’t accepted for who they are find a sense of community among their fellow staff members.

“A friend of mine told me about her experience at Spookers,” Habicht says. “How she was chased by someone with a chainsaw, and then ended up hanging out with them at the Spookers bar afterwards. My first thought was, that place would make a great setting for a film. But it sounded too scary for me to check out. Ten years later I got a phone call from the Madman Production company, to see if I wanted to direct a film about Spookers, and the rest is history.”

Habicht was born in Berlin. When he was eight his family moved to the Bay of Islands. He attended the Elam School of Fine Arts.