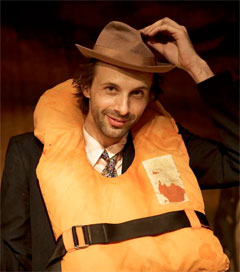 New Zealand filmmaker Florian Habicht, 30, lets the people direct his tale of romance in the Big Apple. In New York he fell in love every few minutes, Habicht says. “Like with life, with people, falling in love all the time. And I just wanted to put that in a film.” The result is Love Story, a loosely improvised no-budget romance that is also a film about making a film and a kind of random record of New York’s infinite gallery of oddballs. Casting is similarly haphazard: his romantic interest is played by Masha Yakovenko, a woman he met initially for five minutes while helping a friend move furniture in the middle of the night. “I love the idea of my life becoming the film,” Germany-born Habicht says. He graduated from Elam Art School in 1998. Love Story is on in Australia now.