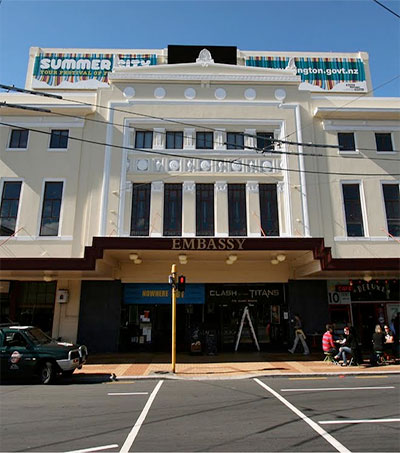 Long May the Embassy Theatre Prosper

Wellington’s “architecturally indulgent” Embassy Theatre, which was built in 1924 and restored “to its former glories” in 2003, is included in the Guardian’s Cine-files series.

Thomas Page of The Guardian describes the Embassy Theatre is the perfect shop front for “Wellywood”.

The location and vibe is like Leicester Square, but less brash and without the crowds.  Page writes that the area has a “laid-back, Kiwi vibe”, unless there is a premiere for a Peter Jackson film, where all hell breaks loose.

“Mosaic tiled floors extend across the foyers and marble staircases take one up towards the moulded plaster ceiling. Wellington City Council underwrote the refurbishments to the tune of $4.5 million, regaining ownership of the building in the process; it must be noted that they have done a remarkable job in retaining the theatre’s original features and warding off any hint of kitsch.

It wants to promote fresh, independent cinema, and already announced at this year’s International Film Festival (26 July – 10 August) are 20,000 Days on Earth by Nick Cave, home-grown director Florian Habicht’s documentary on Pulp, and the weirdly wonderful Frank and John Ridley’s Jimi Hendrix biopic, Jimi: All Is By My Side. Marvel’s next outing be damned.

“If you’re going to visit, do it properly: early arrival, a meal upstairs or a cocktail in the bar – ideally both. You can make a special evening of it, and that’s because The Embassy is special.

The burgeoning film industry around the country has done miracles in returning The Embassy back to the public, and the investment is now reaping its rewards. Long may it prosper.”