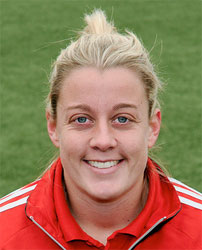 Fern Hopes for Place in London

Football Ferns goalkeeper Aucklander Aroon Clansey, 26, who currently plays for English FA Women’s Super League club Liverpool Ladies, is hoping to be in the New Zealand team who will face Cameroon in the London Olympics at the Ricoh Arena on 31 July. “I’ve never been to Coventry before and I’m hoping when the squad is announced in the next month that I am included,” said Clansey, who has won five international caps.