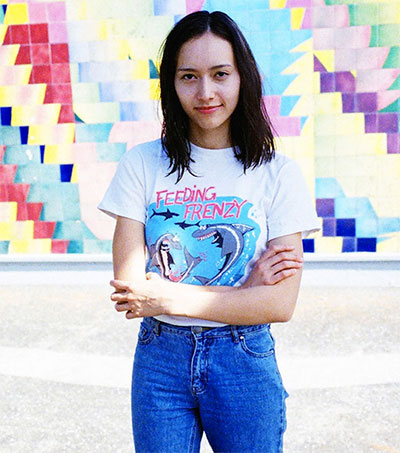 Morningside, the “accomplished” debut album of Auckland’s Fazerdaze, aka Amelia Murray, “is like having the door to a house opened for you, casually strolling in and taking your own time to find a comfortable couch to lie back and relax in,” according to reviewer Warwick Stubbs writing for independent music site Soundblab.

“Fazerdaze is already making waves across the globe and live performances are being praised and sought after,” Stubbs writes. “The confidence shows in every aspect on this independently written, produced and recorded album – unabashed simplicity engulfing the listener, but never overpowering.

“First song ‘Last to Sleep’ has some lineage coming down from The Cars with its processed beat, simplistic guitar backing, and thin keyboard figure, but vocals are all dreamy reverb and calm. This calm turns to pure indie pop with the breakout hit ‘Lucky Girl’ – delay filling up all those spaces the short verse phrases leave until vocalist Amelia Murray reiterates the point in the chorus ‘I know I’m a luck girl, I know I’m a lucky girl …’ herself. Such a simple song reminds me of all those famous New Zealand 80s Dunedin bands, but here it sits so perfectly in a modern context birthed straight out of the Indie world itself without any true punk precedent.”

Boston-based Glide Magazine was also complimentary, and said: “Considering that Murray performs everything on the album herself, Morningside is an impressive debut LP. Additionally, as only a couple of tracks on Morningside break the three minute mark, it is an easily digestable album and easy to let play over and over again.

Fazerdaze is currently on tour in Europe.

Morningside is out now on Flying Nun.