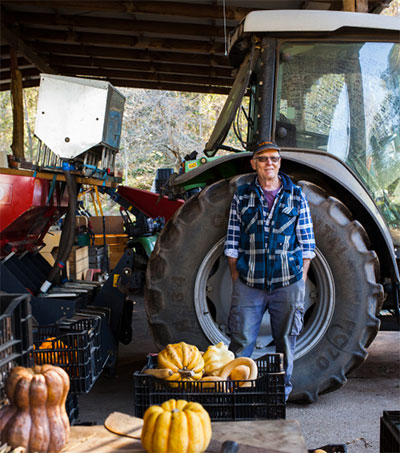 New Zealander Rick Scoones, one suspects, doesn’t have troubles getting a table at many of Perth’s better restaurants. As the public face behind Warren Grange Horticulture – the heirloom vegetable farm he and his wife Barbara own and operate in Pemberton – he’s on a first-name basis with many of the city’s more thoughtful chefs.

Scoones is intimately involved with every aspect of the growing process. He sows seeds. He picks vegetables. He drives through the night to hand-sell his produce at the Saturday morning Farmers Market on Manning before delivering orders to the aforementioned network of chefs. For a relative newcomer to the farming world, he’s taken to it well, not least because – as he puts it – he’s “halfway to 62.”

“It’s fortunate that my head hasn’t caught up with the age of my body,” Scoones says, laughing. “I do a lot of things people at the age of 40 don’t do.”

Topping this list of things-40-year-olds-don’t-do is packing in a career as an environmental scientist in 2011 and purchasing a 107-hectare former potato and tobacco farm. The Scooneses spent close to two years commuting between Perth and the Southern Forests before permanently relocating in 2013 to focus on growing rare-breed vegetables. It’s not hard to see why they made the treechange.

Warren Grange is a lush, calming space hemmed in by karri forest. The honesty box at the front of the property serves as both income stream and South West Highway landmark. The stillness of the country air is broken by the honking of geese. Chooks peck at blemished pumpkins and reward their owners with spectacular orange-yolk eggs.

“We’re not [certified] organic, we’re just sensible and cautious,” Scoones says. “Every time you put herbicide or fungicide on something, it costs a lot of money. It’s got to be targeted and judiciously used.”

Kenny McHardy of Manuka Woodfire Kitchen was one of the first people in Perth to buy Warren Grange produce and remains a loyal customer. Like all enlightened chefs, he writes his menus based on the produce available rather than dictating terms on growers.

“He picks things exactly when they should be eaten,” McHardy says. “When I see the satisfaction on customers’ faces, I’m so proud to serve his produce. His tomatoes are one of the reasons I look forward to summer so much.”